Our second event for 2016 extends our innovative approach to the BookTalk formula once again, providing BookTalkers an opportunity to meet the authors of two recent best-selling novels set in the Victorian period: Gaynor Arnold and John Harding. There will also be the opportunity to hear about the continuing public appetite for the 19th century from Professor Ann Heilmann, an internationally recognized expert on Victorian and Neo-Victorian literature based within Cardiff University.

Neo-Victorianism combines the nostalgic pull of the Victorian age and its aesthetics with present-day interrogations of the past and its limitations.

A complex, yet popular, genre, Neo-Victorian fiction offers an ironic reinterpretation of history based on the gap between past and present. As we advance further into the 21st century, our passion for the Victorian continues to grow: as evidenced in the popularity of novels such as Sarah Waters’ Tipping the Velvet and Michael Faber’s The Crimson Petal and the White, the television serials Ripper Street and Penny Dreadful and genres such as steampunk and the gothic. In their novels, Gaynor Arnold and John Harding have engaged with the Victorian world in complex and compelling ways while employing a variety of different genres: gothic pastiche, bio-fiction, crime narratives.

Inspired by the complicated relationship between Lewis Carroll and Alice Liddell, Arnold’s After Such Kindness (2012), tells the story of Oxford scholar John Jameson, who is spellbound by the young daughter of a friend.

Striking a friendship with Daisy, Jameson entrances her with the riddles and stories he writes especially for the young girl as they spend afternoons alone together. The impact of this unusual friendship come as a shock when, years later, the now-married Daisy, rediscovers her childhood diaries hidden in an old toy chest. Harding’s 2010 novel, Florence and Giles, offers a provocative rewriting of Henry James’s classic supernatural chiller, The Turn of the Screw (1898). Living in New England in 1891, 12-year-old orphan Florence is left to her own devices in a remote and crumbling mansion. Troubled by a recurrent dream in which a mysterious woman appears to threaten her younger brother Giles, when new governess Miss Taylor arrives, Florence becomes convinced that the woman is a malevolent spirit who means to do Giles harm.

The main event (6.30pm) will be preceded by a reception with tea, coffee and biscuits at 6pm in Cardiff University’s School of Optometry and Vision Sciences, Maindy Road, Cardiff CF24 4HQ. Please note the slightly earlier start time for this event.

All welcome! Book your free tickets via Eventbrite by clicking here.

Gaynor Arnold was born in Cardiff, but now lives in Birmingham.

Her 2008 debut novel Girl in a Blue Dress (based on the marriage of Charles Dickens) was longlisted for the Man Booker Prize, the Orange Prize and the Desmond Elliott Prize. Gaynor’s short story collection Lying Together, partly based on her experiences as a social worker, came out in 2011 and was longlisted for the Edge Hill Prize. Her second novel, After Such Kindness was published in 2012. Gaynor has also co-edited a short story collection, The Sea in Birmingham: 30 Years of the Tindal Street Fiction Group (2013), with Julia Bell, and is just finishing another novel set in Victorian England.

John Harding was born in a small Fenland village in the Isle of Ely. 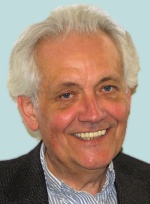 He has spent most of his working life as a freelance writer, writing for a variety of national newspapers and magazines. His books have been published in 12 countries and translated into nine languages. His first novel, What We Did On Our Holiday (2000), was shortlisted for the WH Smith First Novel Award and was a huge critical and commercial success. It was followed by the much acclaimed While the Sun Shines (2002), and One Big Damn Puzzler (2005). His recent novel, Florence and Giles (2010), an international bestseller, has sold more than 250,000 copies and has been optioned for a motion picture currently in development. His latest novel, The Girl Who Couldn’t Read (2014), is the long-awaited sequel to Florence and Giles.