When I placed my head on my pillow, I did not sleep, nor could I be said to think. My imagination, unbidden, possessed and guided me, gifting the successive images that arose in my mind with a vividness far beyond the usual bounds of reverie. I saw—with shut eyes, but acute mental vision,—I saw the pale student of unhallowed arts kneeling beside the thing he had put together. I saw the hideous phantasm of a man stretched out, and then, on the working of some powerful engine, show signs of life and stir with an uneasy, half vital motion.

Mary Shelley’s recollection of her moment of inspiration for Frankenstein is every bit as gothic as the immortal scene of unnatural creation found within the pages of the novel itself.  When it appeared in 1818, Shelley’s debut novel was a sensation, leading reviewers both to celebrate it as a work of ‘originality’ and ‘extreme interest’ and to denounce it as ‘an uncouth story, in the taste of the German novelists, trenching in some degree on delicacy, setting probability at defiance’. The germ of this gothic tale is to be found in an evening of reading French ghost stories by the Byron–Shelley circle, who were sojourning during the summer of 1816 in the Villa Diodati near Generva. So entertained were the companions that they agreed to a ghost-story competition of their own. While Lord Byron, Percy Shelley and John Polidori conjured their own quite chilling spectres, they were eclipsed by the dark and brooding tale written by Percy’s 18-year-old mistress, Mary Godwin, which has gained a monumental, unnatural life of its own over the past two centuries. 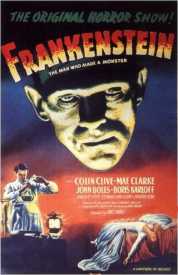 To celebrate the 200th anniversary of the novel’s composition this June, we are delighted to offer another innovation of the BookTalk formula: a screening of Universal Pictures’ iconic 1931 film adaptation of the novel, directed by James Whale.  Unlike the articulate and philosophical Creature of the novel, Boris Karloff’s monster is a mute, shambling being that is by turns destructive and sympathetic. More than any other adaptation—perhaps even more than the novel—it is this version of the story that dominates our popular consciousness today, inspiring numerous later adaptations and countless Halloween costumes.

As well as the screening, this evening’s BookTalk will feature four speakers who explore a number of different aspects of the Frankenstein myth:

The main event (6.30pm) will be preceded by a reception with tea, coffee and biscuits at 6pm in Cardiff University’s School of Optometry and Vision Sciences, Maindy Road, Cardiff CF24 4HQ. This event is jointly hosted with the Cardiff Romanticism and Eighteenth-Century Seminar.

All welcome! Book your tickets via Eventbrite by clicking here.